What use is a future without freedom? 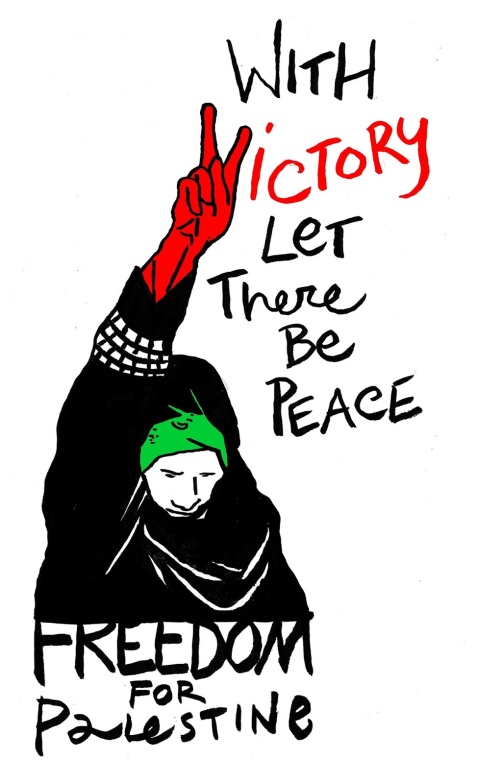 Fridays for Future in Freedom – or: Poisoned Climate in Palestine

What use is a future without freedom? How can one create a good climate and prevent a climate catastrophe without rising against the suppression of freedom – without achieving freedom and freedom of expression for Palestine? Let us imagine: a Palestinian girl would have sat down in front of the German Reichstag or the Federal Chancellery – with a poster “School Strike for Freedom” in front of the chest. Would she have noticed a passerby? Hardly, since this topic is withheld from young people in the schools. In fact, the Nakba belongs in all public schools – as well as the Holocaust. Both are inextricably linked. The right to support the BDS movement (boycott, disinvestment, sanctions) must be an integral part of our society and must not be criminalized as anti-Semitic.

Preserve democracy and freedom of expression

All public institutions and officials are required and obliged to protect and defend these rights in order to preserve democracy and freedom of expression. That’s why it’s worth pushing for “Friday for Freedom” marches. Together with Muslims and committed citizens, we should build a lobby that opposes the indifference to Palestine, the hatred of Islam and the climate poisoned from it.

However, German politics has done nothing for the freedom of Palestine, but it has contributed to make the misery of oppression and occupation worse each year. With German weapons and German support, the Merkel government has actively contributed to this “climate deterioration” in Palestine – otherwise the constant repetition of the reference to the “two-state solution”, but with the support of Zionist slogans and the right to “self-defense”, when it really comes to hegemony, violations of international law and Judaisierung. Anyone who has “given” the raison d’être for his safety – like the “Jewish state” thanks to Merkel – does not need to fear for his right to exist. And that’s the big mistake that undermines our Constitution, because the existence of this state does not correspond to the constitutional paragraphs. No, the existence of the “Jewish state” in its present form must be called into question as long as the question of Palestine is not clarified and a sovereign state has not emerged for all its citizens in a healthy climate with equal water distribution.

While frantic young activists roam the cities Friday through Friday, skipping school attendance, politics are struggling to accommodate this new movement and take the lead. It seems to me frightening how a 15-year-old autist managed to trigger such a demonstration tsunami, almost out of nowhere. Let us remember: on August 20th, 2018, a frightened-looking girl with a fixed look and depression sat in front of the Swedish Reichstag (Riksdag) with a placard in front of her chest saying “School strike for the climate”. She wanted to continue until Sweden follows the climate agreement of Paris.

How is it possible that in such a short time, such a movement was possible in which it was almost canonized. Pope Francis praised her, and a Swedish church congregation compared her to Jesus as a “chosen successor”. Already she is being traded for the Nobel Peace Prize after being awarded a prize by Amnesty International. I see in it a great danger coming towards us. For if it is possible to put this type of mass hysteria to fruition so quickly, then this can be a real danger with other protagonists and populists. Who controls Greta Thunberg and with what ulterior motives and interests?

This controversial climate activist, coached by her parents, Svante Thunberg, actor, and painting Emman, opera singer, goes on tour. Soon her mother wrote a bestseller about this spicy family story. Now every reader knows about Aspergers autism and depression! Her last appearance at the climate summit in the United Nations was an embarrassment for me. “You have stolen my dreams” and “that you dare”, or “if you abandon us, we will never forgive you” and “I would have to go to school and sit at the other end of the Atlantic”. Yes, she would only! I found this performance embarrassing and can not sympathize with what makes Thunberg so interesting. Mind you, that has nothing to do with climate change, which of course has to be and will be addressed.

On the other hand, this movement was quickly abused by politicians and various other governing representatives, as they try to bask in Thunberg’s “halo.” I see both currents with great concern. On the positive side, right-wing populists, politicians like Trump and Bolsonario attack this movement and deny and isolate climate change. Which will hopefully encourage many of their constituents to change their minds at the next elections.

Why is not there a Palestinian activist who is heard by the UN, who stands up for Freedom and good climate in Palestine and is so celebrated? Because this topic is not heard and is displaced by the international community, according to the wishes of the “Jewish state” and its lobbyists! Has this movement ever dealt with the environmental problems in Africa, Asia and Palestine? In Palestine, for decades, we have been witnessing a “climate apartheid” that deprives the Palestinians of the water of the Zionist occupying regime and withholds it so that the Jewish settlers can revel in their luxury occupation life. Gaza will be so dirty in a short time, according to the UN report, that it will be uninhabitable. Two million people in this cordoned off concentration camp live with dirty sewage and misery due to water scarcity. Currently, the occupied West Bank is once again deprived of power and the lights are turned off. These arbitrary punitive measures are perverse actions of the Zionist occupiers who are repeatedly used as blackmailers against Palestinians.

As it has recently become known, Netanyahu and Gantz have agreed on sounding for a new unity government. Netanyahu and Gantz, as I commented in my last commentary “From the Rain to the Roof”, do not belong to the government, but to the International Court of Justice in The Hague. If President Rivlin meets with Netanyahu and Gantz this week, he will entrust one of the candidates to forming a government, and then the power-rotation scramble will begin. It seems that Netanyahu is not going so fast as it seems. Before the election is after the election, nothing new in Palestine!

Palestinians deserve a Friday for Future in Freedom!

Chancellor Merkel, the former Minister of the Environment, later “climate chancellor” and chameleon of German politics, has been trying for years to make her mark in this way. When she traveled to New York more than 29 years ago and subsequently made memoranda of understanding to lower greenhouse gas emissions, she certainly was not yet aware of what would happen in 2019. She, who had long since become an “industrial and automobile chancellor,” still defending the automobile industry when she was exposed to her criminal activities. The first of these “criminals” are already shouting for subsidies for “electro-innovations”. What tricks are they going to come up with this time so that they do not run out of energy and get their money’s worth?

Cleverly she tries again and again to reclaim goals and topics in order to put herself in such a scene. Even though her glamor is fading more and more and her slogan “We can not do it”, she has managed to put a staging without substance on her GroKo stage.

After 19 hours of negotiations, you saw overtired government members who tried to sell a manageable climate compromise, which should not really hurt anyone, as a big hit. Politics should shape, not manage the problems and displace solutions, rather than solving them. You can really feel how a black-red troop, a coalition on call, who has to fear for their re-election, should create a bit “better climate”, a feel-good atmosphere in “dirty times”. As long as the stakeholders who continue to make good money in the production of CO2 can be satisfied, as long as the greenhouse gas levels reach new heights, climate protection is still a long way from being effective.

Where are the simple solutions?

Why has not “Merkel” finally ordered the simple solutions for Germany? Finally, a speed limit, as is customary throughout Europe, finally to go to the diesel subsidies and delete these, raise the air fares and bring the ships and cruise ships on environmental course? It is to despair how this coalition is controlled by lobbyists who always sit invisibly at the table and in reality co-govern. Where is the steering effect, if these problems are not eliminated?

A bad signal was only two days after these “climate killings” that Merkel and Defense Minister Kamp-K (n) arrenberger sat almost together, but in separate government planes to fly to the US, to the East Coast. The Secretary of Defense arguably serves as a “commander and paymaker,” pledging her US counterpart Esper to contribute more to US-led operations in the near future. While the Chancellor arrived as “Klimaqueen”, previously together with the French colleague Macron and the British Johnson decided to hold the Iran responsible for the attack on the Saudi oil facilities – probably serious rumors well-informed Israeli (!) Circles that point to the high probability that Israel is behind the attack.

After that, AA-Maas will also join in and arrive with the next government machine to participate in the UN General Assembly. So much for German government climate policy and role model function. Main thing the GroKo feel-good climate is right – which could change by 2021 at the latest to the next election.

We continue to buy nuclear power from neighbors or lignite from Russia and force electric cars without having to deal with the problems of highly toxic lithium batteries and batteries and other toxic substances and their disposal. What about glyphosate that can still be sprayed in German fields? This policy acts like a patchwork whose seams are as brittle as the decisions.

If Merkel realized that politics is what is possible, then her possibilities have long been exhausted and she is as exhausted as her policies. What has she achieved? Our infrastructure in rural areas is catastrophic, which I can confirm from my own experience. Our South Tyrolean or Austrian neighbors are much more efficient, not to mention our Swiss neighbors. Like the internet, every Portuguese mountain village is better served than we are.

Do we want a division of society and an ever greater political disenchantment? Will there be German “yellow vests” on our streets soon? I wish for the future demonstrations for “Fridays for Future in Freedom,” which stand for the end of the poisoned climate in Palestine.