HASBARA ON TOUR IN GERMANY

We should all defend ourselves against such openly publicized manipulations of Israeli propagandists and warmongers in the “public law”! Israeli Propagandist on Hasbara Tour in Public Law Evelyn Hecht-Galinski At the Anne-Will-Talkrunde on Sunday on “Iran presents ultimatum – how dangerous is the nuclear dispute for Europe?”

HASBARA ON TOUR IN GERMANY

We should all defend ourselves against such openly publicized manipulations of Israeli propagandists and warmongers in the “public law”! 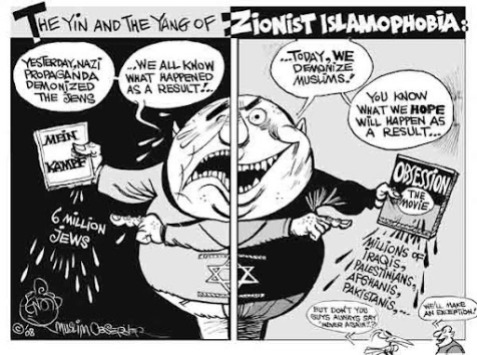 At the Anne-Will-Talkrunde on Sunday on “Iran presents ultimatum – how dangerous is the nuclear dispute for Europe?” You could already see from the guest list, in which direction the audience should be directed and where the disreputable Hasbara wind blowing. (1) The unilateral partisanship for the Occupying State of Israel, as represented by the government and AA-Maas, was of course also reflected in the broadcast of 12 May. A guest from Iran was spared, and instead invited the scientist Katajun Amirpur. She and Martin Schirdewan, The Left and Member of the European Parliament, both relatively harmless contemporaries, hardly spoke. For that, Mrs. Will once again showed

The fact that this propaganda show wants to make a war for the German Michel shows that no leading Iran expert, eg Michael Lüders or Mohssen Massarrat, was invited. Critical voices are undesirable in ARD, because one fears the truth! With these two real experts, “Melody” would certainly not have had such an easy time, and her lies would have been publicly exposed!

It is not Iran and the “mullahs” that threaten the “Jewish state”, as the Israeli propagandist repeatedly asserts, but the other way round: it is the Netanyahu regime that has been using Iran as a monster state for years with ridiculous fake news has built up. Everything is a fatal reminder of the Iraq war, which was known to have been started by the lie propaganda of the Bush administration and even then the stirring “Jewish state”! And even then it was the aggressive John Bolton who advised Bush and now repeats the same dirty methods with Trump!

USA-Israel: the “axis of evil”?

And it is the USA that has been threatening world peace for years with its extermination campaigns. US treaties are not worth the paper they’re written on, and we see what kind of spirit this President Trump is that breaks international treaties, unilaterally terminates, and seeks to blackmail his deals. In fact, he praises himself and his presidency for it.Astonishingly calm, Iran reacted to the sanctions and threats of these two “rogue states” USA and Israel, or should I say “the axis of evil”? Or is “the two apocalyptic riders” even more appropriate?

Following the unilateral termination of the contract by Trump Iran was, after all, go into the country a year without the EU has moved towards a solution acceptable to Iran agreement, and only then to announce that he no longer feels bound by the compliance of the nuclear agreement. This is more than understandable after the collapse of the EU. After all, unlike the US, Iran has kept the treaty. It is therefore more than brazen for German Foreign Minister Maas to call on Iran to comply with the nuclear agreement before meeting with his US counterpart Pompeo in Brussels! Obviously, he is too cowardly to turn to the right, indeed defaulting, addressee.

It is unbearable how manipulated Israeli propagandist Sucharewicz is to present her “suspicion” that Iran could secretly make nuclear weapons, as a factual statement, especially given that Israel possesses nuclear weapons but has not yet signed the NPT and does not need to fear IAEA inspections.

The Zionist regime: one of the most dangerous warmongers

The propagandist repeats Iran’s government-sponsored mantra as a state sponsor of terror and warns against “appeasement” against Iran, which is more than blatant, because we know that Israel has nursed Syrian terrorists into its hospitals. And let us not forget that thanks to European and German help, the Zionist regime has also accumulated an arsenal of weapons that makes it one of the most dangerous warmongers in the region.

Unlike Iran, which has never fought a war of aggression, the “Jewish nuclear state” is a dangerous aggressor against all its neighbors, which threatens world peace. He runs a more than inflammatory policy that wants to lead us into belligerent and aggressive politics that cost us dearly.As the saying goes: hang on – catch!

The German politicians and the media have completely submitted to the Israeli war rhetoric and regard this state as an eternal victim – after the horrors of the Holocaust. The best example is the more than disastrous foreign policy of the “Auschwitz Minister” Maas, who pursues such a mercilessly one-sided pro-Israel policy that it is extreme even by German standards. Obviously the influence of his national-racist girlfriend Ayelet Shaked, and her “fascism” perfume. Did the beguiling scent infatuate the “Auschwitz Minister” and cloud the brain? (3)

His policies towards Russia and Turkey, as well as his support for the coup attempt in Venezuela, make speechless and will most likely lead the SPD into single digits. After an unprecedented policy of sanctions against Russia and Iran, with the Trump-Bolton-USA hitting a “total sanctions war” that hits and harms Europe as well, it is overdue, finally, the vassal policy towards the “dealer state” USA to end.

Was not the transfer of US aircraft carriers because of the “Iranian threat” not on the advice of the Mossad done, which interferes more and more in international politics and pulls the strings? Who is behind the US classification of the Iranian Revolutionary Guards as a “terrorist organization”, just like the model of the Palestinian resistance organization Hamas, which also got this dubious US title. Everything influenced by the Zionist friends, the “Jewish state terror state”.

Is it still possible to speak of “German values” when the Bundeswehr trains Saudi soldiers, cooperates with the Jewish “Defense” and Occupying Forces, conducts “war missions” throughout the world, from Afghanistan to Mali?What is to be maintained that only 74 years after the end of the war an aggressive NATO policy is supported, with operations in the Baltic States, and as known only the enemy’s image of Russia.

How long do we want to get caught up in the US and the “Jewish state” by the hawks and let their propagandists run free? After all, if it came to the Iran attack, Europe would be directly affected. It’s better not to imagine what happens if there is an attack or civil war in Iran. So, is it still enough to affirm that one is holding on to the nuclear deal with Iran, but in fact doing absolutely nothing to uphold it? If the Europeans rightly blame Washington for escalating in the Middle East and consider it a fire hazard, then they should act accordingly.

An inferno threatens a US invasion of Iran

If there were a US invasion of Iran, an inferno, as we are now experiencing, could be threatened in Yemen, also thanks to German support from Saudi troops. How did a UN High Commissioner say? German weapons are now encountered around the world. Truly, what an export hit!

It must finally come to an end with a policy of “regime change”, with which one already drives poor countries into ruin, in order to take over power with their willing substitutes. If one of the main causes of unbridled Iran hatred is not the failure to topple Syrian President Assad, this attempt failed miserably, thanks to the intervention of Russia and Iran, but it brought millions of refugees. The Netanyahu regime was richly rewarded by Trump by giving them the Golan Heights “eternally Jewish” in violation of international law.

President Erdogan hit a bull’s-eye as he banned criticism of his policy by saying, “Anyone who tries to overthrow the elected head of state of Venezuela can not talk to us about democracy.” How true!

Let’s fear the Trump world order and its “century deals” that will go down in history as the worst US era of the decade. Yes, these US warmongers are in desperate need of a concrete answer they deserve. How Europe wants to meet these challenges despite great protestations, however, remains a mystery, as the whole German foreign policy. As long as this does not finally get rid of its decades of subjugation to Israel, with an immediate stop the German state rationale for Israel’s “security”, which conceals only an unprecedented support of this international law breaking “Jewish state”, however, all effort remains in vain. Do “targeted killings” correspond to our so-called “Christian-Jewish values”?

Counteract the infiltration of parties and media through Zionist-Evangelical networks!

Let’s not continue to let the Hasbara influence and manipulate politicians and the media as a strategic weapon. It is a multi-million dollar multi-faceted weapon adapted to the digital age. It has its roots in past concepts and propaganda, agitation, censorship and intimidation, up to extortion.Think tanks coordinate and “sell” everything with false, one-sided arguments. Zionist-evangelical networks have infiltrated parties and the media in order to whitewash Israeli occupation policy with campaigns of all kinds, to make the Judaization of Palestine and the ethnic cleansing of Palestine “Kosher”. They work with ignorance and feelings of guilt, and ruthlessly become politicians unfamiliar with the instrumentalisation of the Holocaust and anti-Semitism allegations. Journalists and activists intimidated and slandered. Sponsored journeys with journalists then “lighten up” the uncritical jubilation articles.

We should all defend ourselves against such openly publicized manipulations of Israeli propagandists and warmongers in the “public law”! As coercive payers, we have a right to objective reporting, with different opinions, but above all, to stick to the truth: “All great political action is to utter what is and begins with it. All political petty-mindedness consists in the concealment and complimenting what is. “(Ferdinand Lassalle)  Translated by Deepl.com