“Lying does not call truths and truth does not lie” Enough of the lies and back to truthfulness Merkel’s fairytale world: Between lies and truthfulness By Evelyn Hecht-Galinski The “standing ovations” interrupted Harvard speech Angela Merkel shocked me. How could a so-called US elite university like Harvard fall for so many flat phrases of the German…

“Lying does not call truths and truth does not lie”

Enough of the lies and back to truthfulness 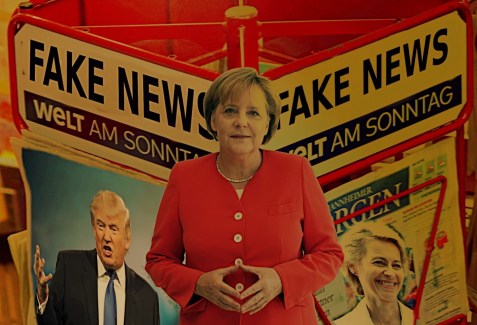 The “standing ovations” interrupted Harvard speech Angela Merkel shocked me. How could a so-called US elite university like Harvard fall for so many flat phrases of the German chancellor? Has Trump’s mental level reached such a low point that even Harvard professors and students applaud everything that comes from the supposed “salvific figure” of German politics, “the most powerful woman in the world”? How Merkel “beautified” her GDR past was already unbearable. How she got from her apartment in East Berlin, which was close to the wall that she “could not overcome” for a long time. “Every day I had to turn in front of freedom,” she can complain so only in distant Harvard, because they do not know that Merkel in the GDR has led a privileged life. Speaking of and by the way: For years, the Palestinians have been forced by Israeli disregard of international law, before the IGH report illegal Israeli Apartheid Wall “turn from freedom”. Well, what is true for Angela does not have to apply to Ali.

Merkel’s relief over the fall of the Berlin Wall as a fairy-tale hour Oberkitsch: “There is a magic in every beginning”. How could these elites only be amazed by this lazy “magic”? From ignorance? After all, if you look closely at her past, this sorceress was anything but an active GDR opponent or even a victim. Was not this pastor’s daughter living in Hamburg shortly after her birth, with her parents moving to the GDR? Was not she more connected to the system than she is today? Reading the facts from Merkel’s biography “Nothing Hidden – Not Telling Everything” from the journalists Günther Lachmann and Ralph Georg Reuth in 2013, a completely different Merkel comes to the fore. Does not the image of a “FDJ official”, a woman, appear which was initially against reunification? (1) (2)

Was Merkel’s life in the GDR not “rewritten” so that it could be “reconciled” with the expectations of Christian Democratic followers? If this “Wende Chancellor” had been celebrated like a pop star, would this biography have been distributed among the US claqueurs?

But in times when Germany, despite or because of (?) Trump German politicians emphasize the transatlantic friendship and soon even the “geschaged” ex-SPD leader Gabriel will lead the transatlantic bridge, what can we still expect in substantive politics? Finally Merkel was applauded for her alleged Trump criticism, without naming his name. But what is to be held by such a soft-pedaled “criticism” if, after her return to Berlin, she had nothing more urgent to do than to assure US Secretary of State Mike Pompeo of “our” unbreakable friendship. The Chancellor, as well as Foreign Minister Maas, soothed Pompeo, who, while having differences in Iranian policy, pursued the same goal of preventing Iran from owning nuclear weapons. The fact that the “Jewish state” possesses nuclear weapons and is therefore by no means to assume a “threat” through Iran is concealed. In their worldview, “Jewish Star Wars nuclear weapons” are probably allowed as “self-defense.” Never forget that unlike Israel, Iran has never started a war!

To be surpassed in false hypocrisy

This finally leads me to the very core of my criticism of this Chancellor and German foreign policy. Merkel is being hailed for alleged critical allusions to US President Trump, who has made fortifying the fortifications along the Mexican border one of his most important projects, reporting “relief” about the fall of the Wall and about “possible changes are when we approach them together. ” And that is not to be surpassed in false hypocrisy.

The sentences of Chancellor Merkel: “Lying does not call truths and truth does not lie” actually hits the gist. However, the truth about the apartheid wall in the “Jewish state” does not make this state-chancellor of the state look better. Why are German politicians and the media so obviously lying when it comes to the politics of the “Jewish state”? Why is the BDS movement being defamed as anti-Semitic, why are al-Quds (Jerusalem) demonstrations denounced as anti-Semitic, while the Jewish occupation and capture of Jerusalem are tacitly accepted? Why are calls to “child murderer Israel” suppressed, while the Zionist infanticides are not prevented? Do not Merkel’s “values” apply to Palestinians? Their “Christian Zionist” values ​​have brought us to worthlessness, which justifies Jewish goals and thus is beyond our constitution. Its raison d’être for the security of Israel has placed Germany in a dangerous dependence on the “Jewish state terror regime”, which threatens not only our freedom of expression, but our entire policy.

We should be happy about any Israel critic in these times of slander. Why is there a constant reference to anti-Semitism and hatred of Jews by Muslims, while right-wing populist politicians are welcome guests in Israel, and parties in the fight against anti-Zionism and anti-Semitism are in complete harmony with all other parties?

Merkel’s Reason for the State: Being Adapted and Misplaced “Truthfulness”

For years, under the Merkelian raison d’être, a media and political climate of “correct” adaptedness has developed which is developing dangerously away from democratic structures. If again and again the “never again”, in reference to the Nazi past is pointed out, but the Zionist state terror regime is unreservedly supported by them, then something is no longer true in Germany. What we need is a new democratic policy that NEVER says repeat the mistakes of the past.

The “truthfulness” the Chancellor speaks of is lying when she continues to speak of a two-state solution, without ever having made a finger to achieve that goal. Since she has been at the helm, the number of Jewish settlers has risen to about 600,000. Since her reign, the Judaization of Palestine has been progressing rapidly. Merkel’s good behavior is crowned by numerous Jewish and US awards and honorary doctorates.

It is now time for Merkel to crown her forthcoming departure with proposals for a comprehensive peace plan for Palestine, including elections and an immediate end to the illegal occupation of Palestine and the Syrian Golan. Or we are facing a shambles of foreign policy. Merkel has led us into foreign missions and cooperations that have nothing to do with values, but only with preservation of power, splitting and armament increases. It can be celebrated as a mediator, while in fact it has brought our relations with Russia to a low point, the long-negotiated and promised EU membership, which prevented Turkey’s accession from the beginning. Muslims do not fit into their Christian-Zionist EU-world. It has questionable states, like Ukraine, Croatia or Kosovo is courting and allowing Palestine to be destroyed by the Zionist apartheid regime. Does Germany have no really more important problem than to recognize its right to exist and thus issue a “kosher license” for land grabbing and judaizing to the “Jewish State”?While the overdue recognition of the right to exist of a Palestinian state in their “Christian Zionist” world view has no place.

Enough of the lies and back to truthfulness