ZIONISM …. ‘NO GUILT, NO ATONEMENT’

While Palestinian rights are rarely taken into account, the “Jewish state” has increasingly established itself as the only power in Palestine. Image by Carlos Latuff Zionism knows no guilt and no atonement By Evelyn Hecht-Galinski Zionism and the Zionist state terror have only one goal: the sole claim to power on Palestine and the…

ZIONISM …. ‘NO GUILT, NO ATONEMENT’

While Palestinian rights are rarely taken into account, the “Jewish state” has increasingly established itself as the only power in Palestine. 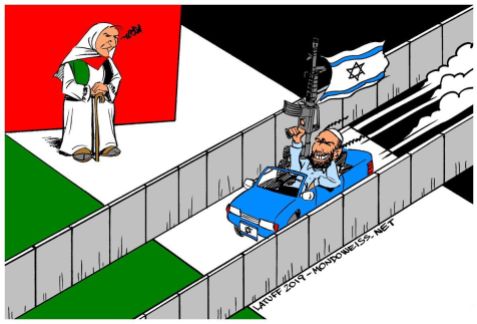 The road to apartheid

Zionism knows no guilt and no atonement

Zionism and the Zionist state terror have only one goal: the sole claim to power on Palestine and the enforcement of this claim by all means. Are they so sure that they can always rely on state European and US support?

The ethnic cleansing of Palestine is a crime against humanity

The ethnic cleansing of Palestine is a crime against humanity, unpunished until today, and leads from Deir Yassin to Gaza. (1) (2)

In fact, this Zionist colonial policy is losing more and more support in the German, European and American populations. But what does that do to the rulers? Have you ever seriously dealt with citizens’ interests and ideas?Why? Are you so sure in their fortress Bundestag or Chancellery. Seldom did one see so run-down politicians across all parties. They aimlessly give interviews and travel the world, always with the transatlantic alliance in sight, human rights or not. Just do not offend or annoy the “US friend”.

Let’s see how devastating this kind of subservience affects our politics and economics. Last summer, Foreign Minister Maas had boldly promised in the face of new US-Iran sanctions, to work intensely to ensure that the trade with Iran would be possible and secured support for companies.What was left of it? On Monday, the Federal Government announced its decision to withdraw its operating license from the Iranian airline Mahan Air, which flies three times a week from German airports to Tehran. The Gro / Ko goes beyond sanctions imposed by the EU in early January. The reasons were dubious findings,

I remember all too well friends and relatives in the Netherlands, who were horrified when the Boeing 747 crashed on October 4, 1992, the El-Al, which crashed on an Amsterdam block of flats and an unknown number of residents to death crack. Three crew members and a passenger also died in the crash. As the Israeli magazine Shiva Yamim reported, the machine had Yamin missiles and military goods aboard that exploded so that the stabilized uranium burned into the wings and spread throughout the area because of the heat Inferno arranged. Since the crash, until today, many residents who had the misfortune to live at the crash site fell ill. Everything was immediately seized by the secret service and covered up. I also know through Dutch acquaintances of Jewish agents who accompanied from Amsterdam via Poland regularly dangerous military supplies in El Al machines, over Poland. was and will the “Jewish state” be deprived of the permission to fly? (3)

To this end, I would like to remind all the human rights hypocrites, especially the Germans, that the Jewish state itself, killing countless of its opponents from its “shadow warriors”, also abroad, to which it is also equipped by his willing German helpers with false passports , It goes without saying that the Jewish state has never been held responsible for the murder policy, at least not for its accomplices. (4) (5) (6)

Where the dubious accusations against Iran come from, we can imagine.The US government has been pressing its allies for many years to withdraw the Iranian line, which has been on the US sanction list since 2011. The ban is also seen as a sign to the Americans. Promptly came the poisoned praise of US Ambassador Grenell, who otherwise excelled only with extortion attempts and undiplomatic poison arrows and isolated in Berlin. All just on the day when the “Jewish State” bragged about attacks on Syria and Iranian fighters and announced further attacks as part of a “permanent policy”. Israel will not allow an “aggression” by Iran, said Prime Minister Netanyahu, who is constantly committing aggression terror himself. The “Jewish state” flew countless attacks against Syria, but even Putin was silent. Not to mention world accomplice governments of the “Jewish state”.

Foreign bodies in the Middle East

What this “permanent policy” looks like, we have been experiencing since the founding of Israel. Regardless of the native Palestinian population, Zionist colonization and Judaization were brutally enforced. The sovereignty of neighboring states has been murderously violated and they have managed, by eternal state of war, to establish themselves as foreign objects in the Middle East. Completely condoned by the international community for decades, they are certain that otherwise the unique trump card of “anti-Semitism” will be drawn from the Zionist sleeve, with which the everlasting role of Jewish victims can be instrumentally exploited – and the guilty conscience for their own failure.

The Holocaust does not justify every means

How many Zionist murders, massacres, occupation crimes and the constant land grabbing took place until today the international community? While Israel is constantly ranting about sanctions against Iran as archenemy and painting a new holocaust on the wall, the international community is reacting with rash subservience. Although the “Jewish state”, armed to the teeth, possesses nuclear weapons, it always feels “threatened” and grotesquely pretends to protect only the security of its citizens. Thus, they use state terrorist methods to legitimize every crime against humanity. Therefore one can not repeat it enough and shout to the submissive politicians: the Holocaust does not justify any means, and a genocide remains a genocide remains a genocide, even if it happens under Jewish state direction!

The antisemitism club is always in use

Meanwhile, the “Jewish State” has built a worldwide sayanim-supporter system that is unique. Especially in the US, Jews have taken strategically important positions in politics, the arts and the publishing industry, as Norman Finkelstein, author of the “Holocaust Industry” writes. Why should it be anti-Semitism when Finkelstein points out? In fact, a lot has changed today. Previously, the Israel lobby was not concerned with Jews being routed as such. Today it is completely different, it is explicitly pointed to the Judaism and put this in the foreground, especially when it comes to celebrities. It ruthlessly turns citizens into Jews who have long since reneged on this religion or been baptized for generations. Escape from this moral extortion is as good as impossible, because everything serves the instrumentalization. The anti-Semitism club is always in use, even if it is getting duller.

No reckless “Jewish exaltation” over nationality

Why do not nations finally defend themselves against the ruthless “exaltation of the Jews” over nationality, as it was also celebrated by various Israeli state and prime ministers. Let us only think of France and Germany, where this method was tried on Jewish citizens in order to lure them into the “Jewish state” as the “homestead” of all Jews. This is a crime and contradicts all state laws of a country. Thus, Jews are the “fifth column”, sitting repeatedly on packed suitcases. If Turkish President Erdogan tried that, there would certainly be a media outcry.

Distraction maneuver to distract from the Zionist crimes

This is just as targeted as the ongoing anti-Semitism campaigns, as we are currently experiencing more and more massive, and the move across Europe. What better than distraction to distract from Zionist crimes? How long can and should this policy be good and tolerated? (7)

Legitimate Palestinian resistance is not terror

While Palestinian rights are rarely taken into account, the “Jewish state” has increasingly established itself as the only power in Palestine. While the Zionist state and occupation terror is unchecked, any Palestinian legitimate resistance is branded as terror. Here, too, we experience this method when Islam and Islam merge into a concept, into terror, just as Muslims became the new enemy. It seems that the “Christian-Jewish value alliance” has finally found its common enemy image. This behavior is a fatal reminder of the Nazi past.

Together with the Jews against Muslims

The “never again” became a “again and again”, this time only with new protagonists. This policy is fatal to the right-wing populists and benefits the AfD. All sit in a boat with the Jews and the “Jewish State” and join forces against the Muslims.

US Jews are rethinking

While in Germany and Europe time and again the “values ​​policy” is endeavored, a rethinking takes place in large parts of the USA and among US Jews. Everything that becomes a controversial taboo subject is allowed in the US. (8) (9)

Enemy images constructed as in the Cold War

Despite a US president who overreached everything and supported the “Jewish state” with all his might. While Israel blatantly supported Syrian al-Nusra terrorists, who were able to do their mischief in Syria and thus brought the Syria war to blaze, it flies undaunted attacks against Syria and tomorrow, perhaps against Lebanon or Iran. Everything is possible with this new power strategy, which increasingly binds us into the US-NATO doctrine. This aggressive policy, which only constructs images of the enemy as in the Cold War, can only end in disaster in the long run. (10 (11)

In the US, thanks to the Trump policy and the “state shutdown”, more and more people, including government officials, are sinking into poverty, unable to pay their rent, installments and food, all thanks to the brutal Trump First policy. (12)

But there is a small ray of hope. More and more young Jewish US citizens refuse that the “Jewish state” holds them liable and speaks and acts for them. They oppose openly, even if that can lead to fatal consequences in universities and in professional life. The BDS campaign is becoming increasingly successful internationally. (11)

In this country, there is a lack of critical Jews

Why was so much silence when it comes to Palestine? Because in the US in particular the political system is based to a large extent on sponsoring and donations. Also, the Mc Carthy times are not forgotten and dirt and slander campaigns are therefore not missing their effect. So it is doubly admirable, as more and more Jewish US citizens abandon the fatal Israel-dependent mainstream. While the Israel lobby and its media and political supporters have long since started to provoke dirty defamation campaigns here, critical Jews who are finally campaigning for respect for human rights and finally refusing to embrace the policy of “loyalty to the Nibelung” to an occupied state are lacking to support. Getting up for freedom Palestine should finally be the maxim. Silence wrongfully means being guilty. (13)

We who stand up for Palestinian freedom know, unlike the Zionists, what guilt and punishment mean.