THE MISDEAL OF THE CENTURY

THE MISDEAL OF THE CENTURY 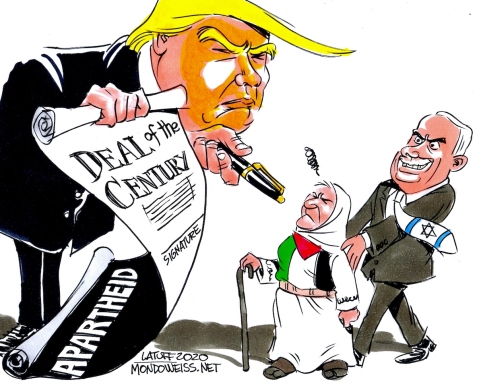 The Limitless US Zionist Power

The American “Dealer of the Century” has given the Israeli colonial regime a “Deal of the Century”. While the German Foreign Minister, “Auschwitz Minister” Maas, is still “testing” this “gift”, every “normal citizen” is now wondering what can be tested if the Palestinians are deprived of all legitimate rights. This so-called “peace plan”, which was developed by Trump’s son-in-law Jared Kushner, clearly shows everyone’s open contempt for the UN Security Council resolutions, and seamlessly transitions into the US Zionist legal violations with which Trump treated the “Jewish state” “The undivided Jerusalem” as the eternal capital, the holy places of Haram al-Sharif, left under Jewish administration and “sovereignty” over the illegally occupied Syrian Golan Heights. Trump is depriving himself of the right to deprive the Palestinians of all rights enshrined in international treaties and conventions, including the legitimate right to return Palestinian refugees to their homes. And like the crimes of the United States, the Israeli war crimes are said to be non-negotiable before the International Criminal Court.

Wild West style: the power of the fittest

In addition, there is a demand elsewhere to protect Israeli or American citizens from Interpol searches and not to have them convicted of non-Israeli or American legal systems. What else does this have to do with a democratic constitutional state? This, of course, also applies to the US position to regard the Jewish settlements on Palestinian land as “not contrary to international law”, which cemented the fact that every Jewish-Israeli demand takes precedence over the legitimate rights of the Palestinians. As in Wild West style, we are dealing with the power of the fittest that undermines the law. International law prohibits the occupying powers from transferring their own people, that is, the Jewish settlers, to the land they occupy.

The demand for Israel to be recognized as a “Jewish state” is also unacceptable and does not correspond to any legal situation. There is nothing to justify that the “return” of Jewish citizens from all over the world is to be legalized, not even by the Holocaust. It is not for nothing that more and more critical Jewish citizens are renouncing this “right”.

The right to justice, equality and dignity is inviolable, that should also be clear to German politicians, who repeatedly refer to the Basic Law and Article 1 “Human dignity is inviolable”, but forget Palestine when it comes to the ” Jewish state “goes. And yet they were trampled on by Trump in consultation with Zionist zealot friend Bibi Netanyahu.

Totally unsuitable vision: to leave the Palestinians “outside” forever

It is therefore not surprising that the patronage policy for the racist “Jewish apartheid state” dominated this “historical moment” in the White House! They were so concerned with themselves and their triumph, intoxicated with their own applause and were so convinced of the success of their completely unsuitable vision of leaving the Palestinians “outside” forever. These also did not exist in the White House – after all, people were so convinced of themselves and the “Jewish people” and their claim to “Judea and Samaria” that Palestine must always have been a “Jewish state”, given by God for this “Chosen” people.

This ruthless disregard for Palestinian life and its rights, and the Trump administration’s reprehensible contempt for civilized human values, in conjunction with the Netanyahu “state terror regime”, fits perfectly into the grid that has been displacing, ethnic, this Zionist regime since its inception Purge, mass murder, collective punishment, illegal occupation, detention without trial and apartheid are all possible.

This behavior shows not only the unbelievability of the United States as a mediator, but also how Trump succumbed to the recent Zionist racism, which was accomplished with the betrayal of the Palestinians. However, it not only brought disgrace to the United States, it also exposed the hypocrisy of the allies in Europe and the Middle East. Their inability and criminal lethargy (Meuse!) To challenge this disgusting abuse of power shows only the confirmation and continuation of the supporting role in the continued persecution and oppression of the Palestinian people by the “Zionist state terrorist regime”.

Combines what belongs together: in intimate “criminal” connection

The announcement of the “Peace Century Deal” coincides with the impeachment proceedings against Trump and the announcement of the formal indictment against Netanyahu for three different cases of corruption. In this way, what belongs together for a long time was united in an intimate “criminal” connection. It was the most shameful and embarrassing Zionist staged action the White House has ever seen and that forever disillusioned an order that had been painstakingly built up after World War II. Among the “standing ovations” by hypocritical “Kippa bearers” and guests such as the “Zocker-König” and “Israel Hayom” owner Adelson, Ambassador Friedman, including Trump’s converted daughter Ivanka and her husband, the “Dealmaker”, real estate speculator and Settler supporters Kushner were completely alone. However, the new US and Zionist friends, the ambassadors of the Arab Gulf States of Bahrain, Oman and the United Arab Emirates were not missing either. Only one skipped the illustrious meeting: the Saudi Crown Prince and “Kashoggi contract killer” Prince Salman, who just saved the Kushner family from bankruptcy.

What a sad circus event that wants to grant the Palestinians less than a bantustan of apartheid, with an uninhabitable Gaza Strip, parts of the West Bank without Jerusalem, without the Jordan Valley, without sovereignty and viability – and everything designed so that this “hull-state” can never be a state and should never be. A “promised” country, as promised by God, should only exist for the non-existent “Jewish people”, while the real existing Palestinian people are denied any right to life in freedom and self-determination.

This illegal annexation of the Palestinian country, particularly in the illegally occupied West Bank, as well as in Gaza, Jerusalem and actually all over Palestine, in violation of international law and in violation of all UN resolutions, is the “Trump Deal Gift” to the “Jewish.” State ”, which sees itself ever closer in its Zionist dreams, the final solution to Judaism. What else is there to check, Mr. “Auschwitz Minister” Maas? Is that your lesson from “Auschwitz”?

This shameful deal is not worth the paper or discussion, just rejection and struggle against it. When will the hypocritical “community of values” finally speak the truth about this deal and contradict colonialism and apartheid, just 75 years after the liberation of Auschwitz and even if this time it concerns Jews and descendants of the Holocaust victims as perpetrators?

This terrible plan legitimizes the Jewish-Zionist robbery of the country, which is to be taken away from the indigenous people and real owners. It is inconceivable that the international community, the UN Secretary General Gutierrez, the Pope, these “guardians of morality”, look away and remain silent about this obvious injustice, and even want to examine Mr. Maas?

Unfortunately, at this difficult hour, the Palestinian people have no government to represent them, only the “Abbas Vichy Collaborative Authority”, which only represents their interests for their own benefit and betrays and sells their people. While President Abbas full-bodiedly announced that all relations with the United States and security cooperation with the “Jewish state” would be cut off, this was as unbelievable as so often before. As several Arab and Israeli media – like Radio Kan – reported, the CIA chief Gina Haspel had already traveled secretly to Ramallah on Thursday to meet with Palestinian and Israeli (!) Officials. Their visit came two days after the Trump deal was announced and aimed to explore the reactions and the nature of the further relationship. Haspel did not meet with Abbas, but with Palestinian Intelligence chief Majed Faraj, who confirmed the continued exchange of information with the CIA despite Ramallah’s announced opposition to the U.S. proposal. Those who have such “friends” don’t need enemies.

Enough of the poisoned “Peace Plans from the White” Zionist House “!

This shameful “peace deal” has no other function than the final colonial takeover by the Zionist regime, a continuation of the centuries-old colonialization of Palestine. Finally, even the last doubters realize that the illusion of the “two-state” myth has been shattered and that all fantasies about this solution belong forever in the bin of Zionist propaganda. Did these supporters really think that by recognizing this Zionist entity, they would achieve an absolution that frees them from all responsibility and guilt?

It is high time that the hypocritical community of states, even under pressure and sanctions, compelled the “Jewish state” to recognize international law and the political rights of all people, and to help the Palestinians who live in historic Palestine to have the freedom they have had Is withheld for decades! Apartheid and ongoing crimes against humanity as Zionist rationale must no longer be the Jewish legal norm.

A Jew to the Zionist fighters

What do you want?

Do you really want to outperform them?

who have trodden you down

in your own blood

and in your own droppings?

Do you want the old tortures?

pass it on to the others now

with all brutal enjoyment

Now you really want it

be the new Gestapo

the new SA and SS

and from the Palestinians

do the new Jews?

But then I want too

because I was fifty years ago

even as a child of Jews

to be a new Jew

with these new Jews

that you make the Palestinians into

And I want to help lead them back

to their own country Palestine

from which you drove them out