FED UP WITH GERMAN SILENCE Desertpeace

During this election campaign in Germany, a question is not addressed: How do these parties and their top candidates deal with violations against international law and human rights?Why is Russia subject to sanctions while the “Jewish State” remains unpunished? Why does the annexation of Crimea allegedly oppose to international law, while the illegal occupation of Palestine is not just accepted, but even financially supported? 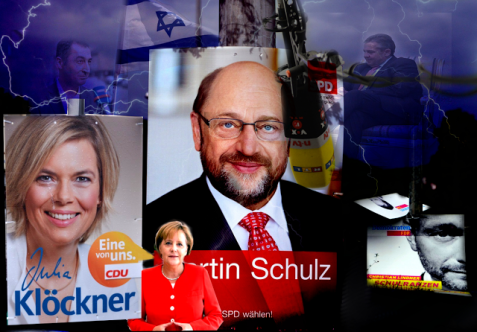 We are fed up of the silence of the German Election Campaigners about Palestine!

International law and human rights are indivisible and apply to all states. And the “Jewish State” always says to be the “only” democracy in the Middle East. If this is true, international law and human rights shall be the basic foundations of the Jewish State. While the Jewish regime based on State terrorism occupies, oppresses, and expropriates a whole people, after a referendum the population of Crimea decided to remain with Russia, because the Western “community of values”, led by the USA, spent many million Dollar in the name of Eastern NATO expansion for the coup in Ukraine by forcing Russia to act.

Our German political landscape is characterised by a lord of the manor approach when it is about prohibiting the Nakba exhibition or Israel-critical conferences, or when it is about refusing conference rooms. And this is exactly the behaviour of philosemite parties linked to the Israel lobby in our country. If this is the situation, we have to ask these parties (SPD, CDU/CSU, FDP, Grünen and Linke) to make a statement about it.

If you remember the Holocaust, the genocide in the name of Germany and the crimes of the century, then you should also remember and put the Nakba, the forced displacement of the Palestinian people, and its consequences in an indivisible context.

In particular for German citizens, independently from the outcome, displacement and occupation are important subjects. There we have to ask ourselves: Why does this propaganda lie –  according which there has never been a Zionist displacement during and before the Nakba and all has been done “on a voluntary basis” – fall on good soil in Germany? Same thing can be said about the “Jewish occupiers’ regime” which always avoids speaking about the occupation.

In the case of the “Jewish State”, the uncritical lobby work of the parties promotes the distrust against Jewish officials and citizens, who quickly accuse others of anti-Semitism to distract from this lobby work, who refuses the rights of the oppressed, because it expresses its solidarity with the “Jewish Occupiers’ State”, a state characterised by colonialism and historical revisionism, by asking for our unconditional solidarity with these criminals.

The air has become suffocating in the German-speaking countries and in the political circles; and this is not only due to the Diesel fine particulate, but also to the stuffy German politics. If after the end of the war there were the last Nazi officials diffusing this right-wing stuffy politics, today their descendants prefer addressing their hate against Russia. The sanctions against Russia  are strengthened, while justified and peaceful BDS initiatives shall be damned as criminal. Whole cities, from Munich to Frankfort, participate in this undemocratic rally.

The double standards when it is about the “Jewish State” are incredible and incompatible with the German Constitution. Although after a referendum the majority of Crimean citizens decided to remain with Russia, German and European politicians speak about a criminal situation violating international law. And since the foundation of the State of Israel in 1948 these same politicians and the “world community” of the “Jewish State” have been permitting the violation against international law, human rights, and all values, and since decades Israel has been leaving scorched earth in its wake in occupied Palestine.

At the moment, in front of the EU office in Vienna, activists of the “Women in Black” are protesting against the support of the “Jewish Apartheid State”. Protest actions of this kind are important in the struggle for a free Palestine. (1)

At the end of August, in Berlin a Pop culture festival will be held; it will be financed by the Embassy of the “Jewish State”, the European Union, and the Municipality of Berlin. As soon as threes bands and artists,  Mohammad Abu Hayar of the Syrian Rap Band Mazzaj, the Egyptian band Islam Chipsy, and the Syrian DJ and producer Samer Salem knew about it, they refused their participation, because they did not want to participate in an event pinkwashing Apartheid and racism. Unfortunately, this moral courage cannot be found in German artists, when it is about Palestine! (2)

In the next “Springer” morning Press, the Berlin Senator of Culture, Klaus Lederer, spoke about a “horrifying boycott”. From my point of view, left-wing politicians are absolutely horrifying when they uncritically accept the Illegal occupation of Palestine and criticize Israel critics because they are engaged  for a free Palestine. Lederer added that by sponsoring the artists’ travel expenses the Israeli Embassy even contributed to the “success” of the festival. Can and should you still vote such politicians? For what concerns myself, my answer is “NO”, because I always check whom and what to vote! In 2014, in the newspaper TAZ ,Pascal Beucker called me an “unacceptable Israel hater” because I had written by comment  „Der Tag des Zorns wird kommen“ (The Day of Rage will Come); this comment was uncritically accepted by Lederer. And I felt in the best of company, because Lederer polemicized even Sarah Wagenknecht and called people to dissociate from Ken Jebsen, the alleged “ideologist” of the “new right”. But I prefer dissociating from left-wing politicians and politicians of all parties like Klaus Lederer!  (3) (4)

I deal with this subject and its consequences every week. Sometimes, I am asking myself for which purpose and why I do it. My concern is that the political parties’ landscape has been dissociating more and more from Palestine, by exclusively focussing on the “Jewish State”. The security of Israel, its right to exist, the particular relationship: all these words are always repeated like a litany. However, they do not become true, but remain mendacious lies of the whole political society and their supporters  in the media.

The deep attunement with the “Jewish Occupiers’ State” is an unbearable legal violation and is incompatible with the German constitution; the same applies to the “particular” relation developed over years because of a traumatised sense of guilt, since it created  the new “guilt” of our grand-children’s generation. The real problem is that philosemitism replaced Anti-Semitism, and became a contagious epidemic, infecting all parties and many media. Is there a vaccination against Philosemitism? Indeed, a clear and logic reasoning and a sense of justice should suffice. However, this is not the case because the propaganda brainwashing, promoted by the “Springer” lobby, seems to be part of German education. That adaptation has already replaced moral courage; and this is not astonishing if you think about the so numerous attempts of intimidation.

I have been trying to wake up people for years now, and to ask them to engage for Palestine and the Palestinians. And they attacked me because I used words like Israel lobby, Judaization, ghetto or concentration camp. However, I am gaining more and more supporters on blogs and in newspapers, and I feel confirmed and happy that my engagement is worth the trouble. And I never tried to make money at the expense of Palestinian solidarity, to earn with it, or to make business at the expense of a humiliated and occupied people.

From where do German politicians take their right to criticize the Palestinian people, which – after 69 years of resistance asks for the end of illegal occupation. How can they deny to them the legitimate right for resistance against illegal occupation, while Jewish occupiers are not just given the right to “defend themselves”, but even the occupation right! What can we expect from such politicians who speak about the “Jewish-Christian community of values”, while if it is about Palestinians they talk about terror and crimes, which have nothing to do with their community of values. Muslims become foreign bodies and the concept of an enemy, and this in particular during election campaigns. Let us do the mental experiment of replacing the word Jews with the word Muslims, or Judaism with Islam. This reminds me terrible days of our recent history. This dangerous development should be limited and stopped.

With our vote, we can decide what and who will rule. The voting right is one of the few rights we still have, in this epoch of apathy and lack of perspective.

We should not ignore how parties deal with human rights and regimes. The State terrorism of the Jewish occupiers’ regime to continue with the Judaization of Palestine must be talked about, as it is not a taboo, but should become one of the main election campaign subjects.

We – and I think also the majority of the other German citizens – ask for information and an open discussion of all democratic parties about how the candidates to be voted will deal with this subject. Also this will be an important criterion of our voting behaviour.